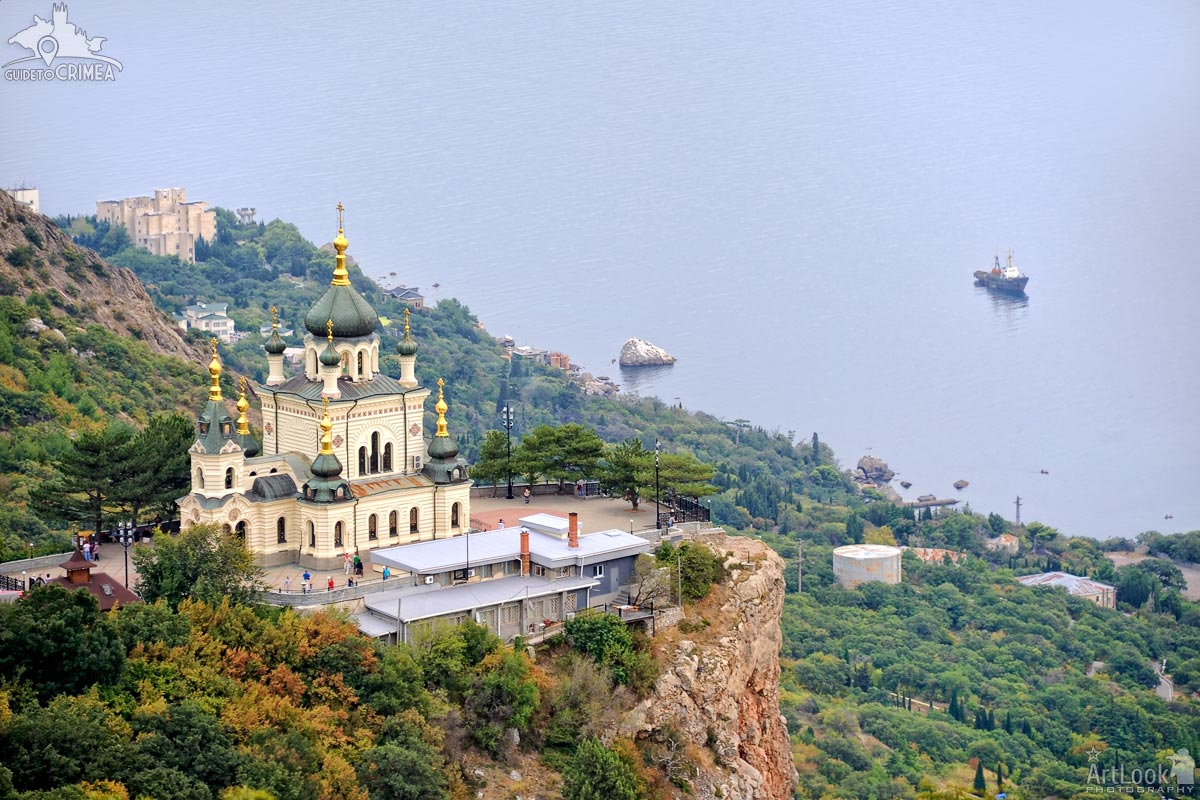 Beautiful view from Baidarsky Pass on the Church of Christ's Resurrection in Foros, a settlement founded and named by medieval Greek merchants. Located almost in the middle between Yalta and Sevastopol, Foros was rediscovered in the late 19th century by Alexander Kuznetsov, Moscow merchant, a Russian "tea king" who had his palace built on the sea shore. Kuznetsov commissioned Nikolai Chagin, a celebrated architect from Wilno, to built the church of Christ's Resurrection in memory of the miraculous rescue of Emperor Alexander III and his family in 1888 train crash in the Borki, on the way to St. Petersburg.

The magnificent church that combines Rastrelliesque Baroque, Russian Revival, and Byzantine Revival styles was built by design of Nikolai Chagin in 1892 on abrupt 400-metre (1312 ft) Red Cliff (Krasnaya Skala) near Baidarsky Pass with spectacular view of the Black Sea. The temple is notable for its luxurious exterior and picturesque interior. The murals created by famous artists Makovsky and Korzukhin, mosaic work performed by Italian studio of Antonio Salvatti. In 1924, after Soviet revolution, Foros church was closed, crosses thrown down, murals painted over, a priest sent to Siberia. Until 1969 it was used as restaurant for tourists who were going to Baidarsky Pass. In Soviet times Foros settlement located on the southern point of Crimea, Ukraine, became popular place for dachas of Soviet generals and leaders (nearby located famous summer residence of Mikhail Gorbachev). The Resurrection cathedral overlooking the village of Foros is a popular tourist attraction and architectural monument of 19th century. It was returned to the Orthodox Church in 1990s after crash of USSR. It went through four restoration campaigns under the auspices of Leonid Kuchma, ex-president of Ukraine. In present days, the church became also a popular wedding location.