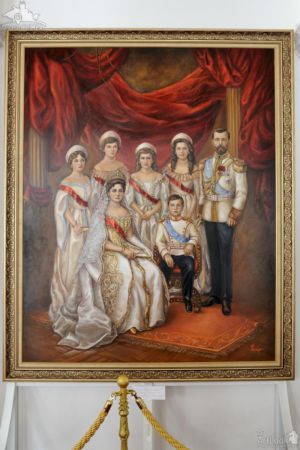 The family portrait of Romanovs in the White Hall was presented to Livadia Palace by the Crimean Prosecutor Natalya Poklonskaya on July 12, 2016. Commissioned by the head of the prosecutor's office of Crimea, the historical portrait of Nicholas II with his wife and kids measuring 1.6 by 2 meters was painted within 2 months by Oksana Kairo, the Crimean artist from Yalta. 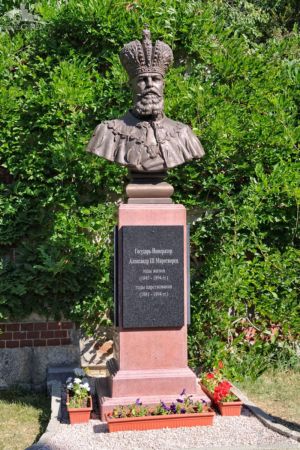 Bust of Russian Emperor Alexander III (years of life 1845-1894) at the Massandra Palace in Crimea. During Alexander’s reign (1881-1894) the country was not involved in major wars, so that is why he was called by all people of Russia "The Peacemaker". He was a man of amazing fortitude, beauty, and harmony, courage and devotion to his Fatherland. 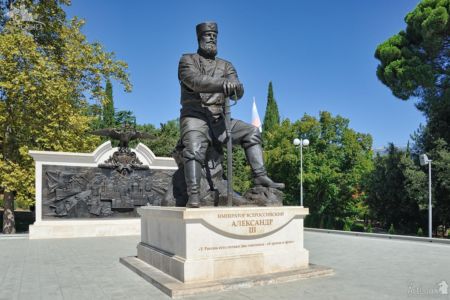 Angle view on the monument to Alexander III, emperor of Russia from 1881 to 1894, the Russian Tsar who strove to maintain peace in Europe, which earned him the moniker of "Peacemaker", in the park of the Livadia Palace, outskirts of Yalta, Crimea. President of Russia Vladimir participated in the unveiling ceremony for the monument on November 18, 2017. The impressive four-meter-tall bronze monument was designed by sculptor Andrei Kovalchuk, head of the Artists’ Union, People’s Artist of Russia, and created at a plant in the Urals. Alexander III is presented as sitting on a tree stump, dressed in military uniform and resting on his sword, with a stele behind him topped with a double-headed eagle. An inscription at the bottom of the monument repeats his alleged saying “Russia has only two allies: the Army and the Navy.”