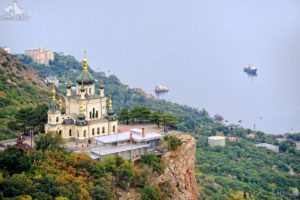 Today the Foros Church in Crimea is a well-maintained snow-white building decorated with beautiful murals and gilded icons. The church is also one of the most sacred sites for those of the Christian Orthodox faith. Located at an altitude of 400 meters above sea level on the Red Cliff, viewed from the coast, the church appears to be floating in the clouds, illuminating the whole area with the reflections from its gilded domes.

This wasn’t always the case, and the church has previously been used as a warehouse, a restaurant, and even as a stable. On several occasions the building has been marked for demolition, however each time, almost miraculously, the temple has been saved. Consequently, the Church of the Resurrection of Christ is not just a simple Crimean attraction: its walls can tell an interesting story of the numerous events that have taken place since the 1880s to the present day.

The History of Foros Church

The appearance of this unique church was facilitated by events completely unrelated to Foros.  Emperor Alexander III and his family were returning from Crimea to St. Petersburg by rail and were involved in a terrible accident. The carriage they were traveling in rolled over and was badly damaged, and fortunately, none of the imperial family died. It was reported that the emperor himself, by a feat of almost inhuman strength, managed to keep the metal structures from falling apart while his wife and children crawled to safety. Following their miraculous salvation and “for the glory of the Lord” the construction of temples later commenced throughout Russia.

Foros at this time belonged to the Moscow tea magnate Kuznetsov, and he financed the construction of a church which only took 2 years to build. Through this magnanimous gesture, Kuznetsov was then granted the monopoly for trading tea in this region.

The Foros church was designed by the Russian architect Nikolai Chagin in a bizarre mix of Rastrelliesque Baroque, Russian Revival, and Byzantine Revival styles, and was consecrated on the 4th October 1892. The walls and iconostases were designed by the famous painter Korzukhin, and the Italian artist Antonio Salviatti from Vincenza designed the mosaic work which was laid upon a golden background. Later, the destroyed paintings and icons were restored by the masters of St. Petersburg art schools.

The original church stood until almost 1919, however, after this, the building had an unfortunate history:

The building was returned to the Orthodox Church in the 1990s following the crash of the USSR. During this time it has been through four restoration campaigns under the auspices of Leonid Kuchma, former President of the Ukraine. Later, new gilded domes and crosses were installed. The pride of the church is the huge bell donated by the Black Sea Fleet that was previously installed in the lighthouse on Cape Sarych. The artist V.I. Potravnov led a group of experts who restored the paintings inside the church.

By 1997 (the 105th anniversary), the Church of the Resurrection of Christ was completely restored and transformed, however in August of that year, a tragic event occurred within the walls of the temple when intruders broke into the church and murdered its father-superior, Peter. Their goal was to steal the money that had been collected to buy the iconostasis. The iconostasis, carved in stained oak was still purchased, and now adorns the church.

The temple itself is one of the most famous sights on the Crimean peninsula, and the Church is also a popular wedding location.

Why is it worth coming here today?

Standing majestically on the high Red Cliff the church is visible to everyone passing along the picturesque serpentine mountain road in Yalta, and it is difficult to imagine that 150 years ago that there were no more than 5 small houses in the village of Foros. Today it is a meeting place for Orthodox pilgrims and people interested in history. After all, every stone here has a story to tell!

Despite its numerous reconstructions, the Foros Church in Crimea has retained its original appearance. It is a Byzantine-style cross-domed temple with nine domes, and the walls are decorated with restored paintings, wooden iconostases and beautiful mosaics.

The most famous temple on the southern Crimean coast, is not turned east, as is customary for Christian churches, but faces towards the sea. There are magnificent views of the Church from the observation platform at Byadarsky Pass and from several other picturesque stops along the way from where one can take stunning photos.

Schedule daily, seven days a week. The church holds morning and evening services every day. Entrance to the church is free. Photography inside the church is allowed without flash. 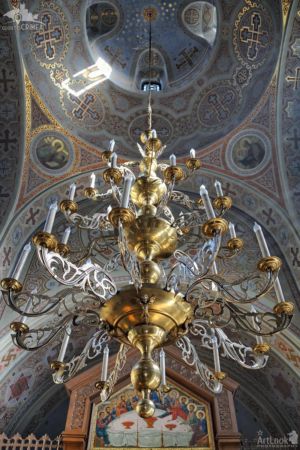 Under Beautiful Chandelier and Dome of Foros Church

Arthur Lookyanov
Under Beautiful Chandelier and Dome of Foros Church

Angle bottom view of a chandelier (Greek: panikadilo) hanging from cupola (dome) of the Church of Christ's Resurrection in Foros. The beautiful cupola and vaults of the church decorated with Byzantine ornamentation. 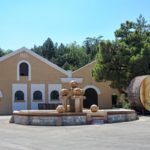 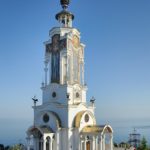 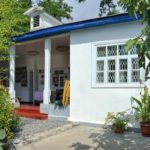 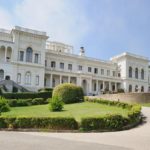 Livadia Palace in Yalta – The imperial residence: the white pearl on the southern coast of the Crimean Peninsula