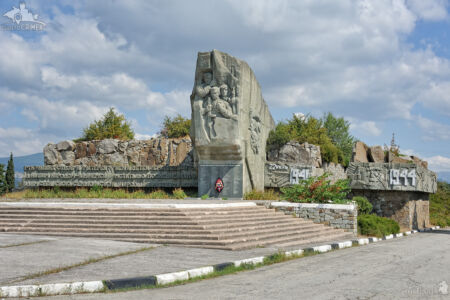 Monument to the Crimean partisans, "Memorial sign in honor of the Crimean partisans who died during the Great Patriotic War" is a memorial complex inscribed in the terrain at the junction of the road from the Worker’s Corner (now the Professor's Corner) to the Alushta-Yalta highway 35K-002 on the 5th kilometer from Alushta city.

The memorial complex was solemnly opened on November 4, 1981. The date is dedicated to the 40th anniversary of the creation of the partisan movement in the Crimea and the formation of the Alushta partisan detachment. The monument is a central composition and side panels made in bas-relief technique. In front of the composition there is a two-level platform with steps. The figures are carved from artificial stone. The faces of the fighters and commanders of the partisan detachment protrude from the central monolithic block - they face the slopes of the Main Ridge of the Crimean Mountains, where the partisans of the Alushta detachment fought. The side panels depict fight scenes.

Sculptor F. I. Aleshchenkov, architect I. T. Semenyaka. It is an object of cultural heritage of regional significance.